This newspaper-archive 5×7 negative from my collection came with its original info sheet (reproduced below), which I was happily surprised to find included information about not just the game, but everything from the camera used to the precise length of lens, exposure info and type of film: “Royal Panchromatic film. Eastman Type,” as they put it.

As the sheet indicates, the shot was taken at Chicago’s Wrigley Field in July of 1956, after Brooklyn Dodger pitcher Don Newcombe was removed from the game and tossed his glove into the air to show his displeasure. The camera used is identified as “Big Bertha,” with a lens sporting an enormous focal length of 40 inches. Big Berthas were essentially 5×7 Graflex or Graphic cameras modified to use very long telephoto lenses (4×5 cameras were also used, but I believe were more often called “Little Berthas”). Some say William Kuenzel of the Detroit News — one of the country’s first sports photographers who began his long career with the paper in 1901 — came up with the concept; a piece on the paper’s website states that “Kuenzel captured many of his sports action shots with a special long-range camera called ‘Big Bertha’ that he developed. The camera was built by the News Photo Department and sold to newspapers across the country.”

It’s hard to know if that is the whole truth; there’s certainly a chance it is. In any event, it seems that Graflex never made an actual “Big Bertha” — they were always the result of modification — but the company did eventually start to produce a modified Home Portrait 5×7 body that could be adapted to become one. Below is a photo of a Big Bertha in use. 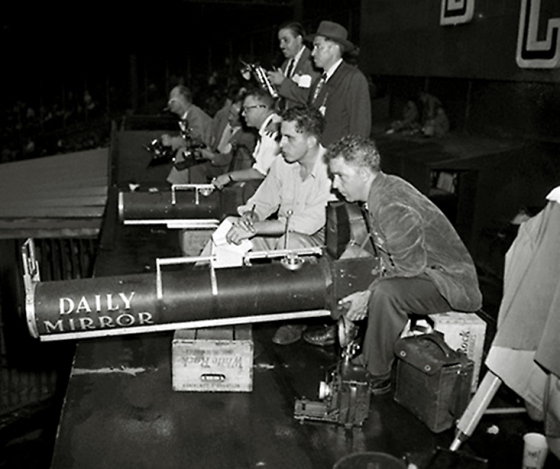 News photographer with a Big Bertha (and another further down)

You can see how absurdly large they were. I have come across accounts of models that weighed in at 120 pounds, so to say they were not easy to use would probably be a pretty big understatement. The cameras were typically fitted with lenses anywhere from about 20″ to an incredible 60″ — outfits with the longer length requiring two people to move them and, from what I gather, being most often used for football, with the photographer sitting at the top of the stadium. Apparently for baseball games that was considered a little long, so 40″ lenses tended to be more common — and indeed that is what was used for the Newcombe photo. An article on the upcoming World Series in the September 1952 issue of Popular Science by the AP photo editor talked about the camera’s use on the baseball field, pointing out that “Big Berthas usually are shot from low level in the photographer’s box with the base resting on the box sill.” The article does contain a couple of shots taken from the outfield stands with a 60″ lens, however, so they did clearly use that length at times for baseball.

Below is a 1940 photo of a 5×7 Big Bertha in the window of a Boston camera shop, along with shots the camera took, displays for Kodak film and some other cameras. The Big Bertha looks smaller than the others pictured above because it has a shorter lens — I couldn’t make it out exactly, but think the placard in front of the lens describes it as being 20″. It’s a Zeiss, in any event (though apparently most often the Berthas used Dallmeyer lenses). The sign at left for “High Speed Kodak Super-XX Film” reads “Snap it Tonight.”